Peter Bonnet and the Magic lantern

The magic lantern, also known as 'Laterna Magica', was probably invented by Christiaan Huygens around 1650, although it is also claimed that Leonardo da Vinci experimented with a similar kind of lanterna magica a century and a half earlier. Photography had not yet been invented at the time so the magic lantern worked with hand-painted images. Initially, it was used mostly in aristocratic circles. By the 18th century, the use of the lanterns had become more varied and effects such as substitutions, sudden appearances and disappearances were employed etc. 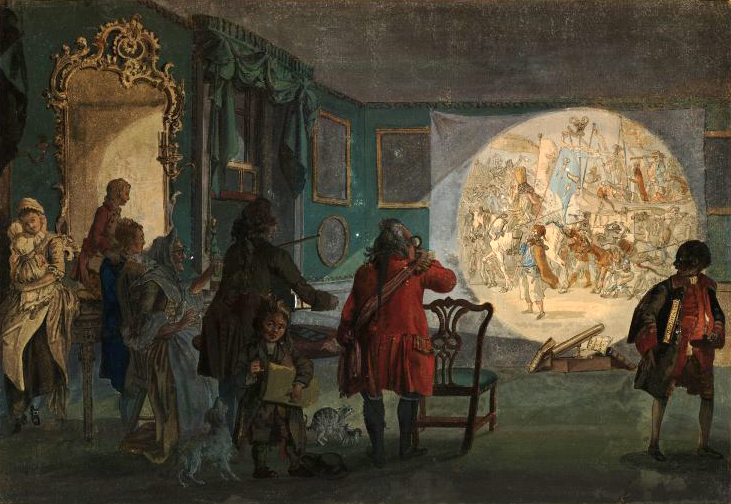 It was also an important educational resource: at universities the magic lantern was used in teaching. In medical studies, a magic lantern was employed to illustrate to students what red blood corpuscles looked like under a microscope, for example, and there are countless series of images available that were used as teaching aids across a wide variety of subjects.

Forerunner of the smartphone

The invention of this projection device is viewed as the forerunner of the slide projection system, and, thanks to its clever use of lenses, also partly as a forerunner of photography. This is why slides, photos, films and television form part of the origin of the display on your smartphone today.

They also mark the very beginning of the film: the very first way to project moving images. How? Using two magic lanterns plates placed over each other. One of them was moved through a mechanism, so that it gave the 'illusion’ of motion. The result can be seen below.

Sloten Museum manages and shows the legacy of former resident Peter Bonnet who, during his lifetime created a collection of magic lanterns which are considered to be unique worldwide. In our ‘magic attic’ you’ll see several wonderful examples. You can also watch an interview with the collector himself, Peter Bonnet.

You're welcome to view two short documentaries from the sixties about this legendary inhabitant of Sloten and the origins of our collection Magic Lanterns (dutch spoken, English and German subtitles available)

Children can also let their imaginations run free and make up their own stories. And, using our drawing and craft tools, they can illustrate these stories with magic lantern images that they can make by drawing images on glass plates using special marking pens. The finished product is then put into a slot in the lantern. A strong lamp shines through the lantern glass and the drawing is projected onto a screen.

We also have a phantasmagoria cabinet: where children can draw and cut out cardboard silhouettes, glue them on sticks, then take a seat in our cabinet and watch as the shadows of the silhouettes are projected onto the screen.

The Dutch Christiaan Huygens problably was the inventor of the magic lantern.
Marketing

People could also colour their own magic lantern glass slides. That wasn't easy though, as paint doesn't stick well on glass.

Making your own magic slide

In our workshop you can make and project your own glass slide. We have special 'glass colouring sticks'. Of course you can take home your slide (for 1 euro).
Marketing

With the magic lantern exciting stories were presented to an audience, sometimes in theaters dedicated to the medium. So these theatres were in fact the forerunners of the modern cinema's.

The building is fully accessible for disabled visitors.

, though it's mainly in Dutch.

On our channel on

you will find interesting and subtitled historical material.

Groups (10 participants or more): please contact us for a tailored offer.

Opening hours and days in 2021